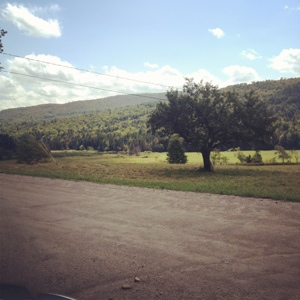 Maybe a dozen miles as the crow flies, it took us nearly forty minutes to get there. We went up a dirt road and crested a mountain, down the other side until deep ruts turned to asphalt. And then we did it again, and another time as well until we stopped at Chris’s house. We were in Vermont – where the joke is that everything is at least a half hour away. I was with the band – good friends of ours, with whom my husband has long played gigs, often in Vermont. Chris, the pedal steel player, and I had often talked about our mutual canning and gardening efforts. A year before he had brought me a jar of his homemade maple vinegar and regaled me with tales of the prolific farm on which he lived part of the year, where blueberry bushes produced fat purple globes through September, and if he was especially vigilant, he could find ramps in the spring and hen of the woods mushrooms in the summer and fall. After the wedding gig not too far away (“about a half hour,” Chris had said), we all decided to head to his house instead of the original plan of camping in the rain. When we arrived, I had barely enough energy to note that Chris’s spare cabin was spotless, and then went straight to bed while the boys stayed up until dawn, playing music and drinking wine.

The next morning, I awoke just as Chris and the drummer were returning from town (at the bottom of the mountain) with locally roasted coffee, local milk, and a New York Times in tow. Chris set to work making French press coffee and blueberry pancakes, while I poked around his cabin, flipping through a century of cookbooks which filled the shelves that lined the hallway, and finding the single outlet to charge my cell phone (although reception was all but non-existent). Jars of maple vinegar – one with seeping rhubarb – were lined up along the counters, in various stages of fermentation. Chris offered me a spoon to taste a dark, almost viscous concoction, which had been made from syrup that had been slightly burnt, which had rendered it ineligible for sale. The young batch still had the slight alcoholic tang of vinegar not quite fully aged. He had explained to me that this batch was a complete accident, and could never be reproduced – during the syrup-making process, it had burned to the point where it had almost, but not quite, ruined tens of thousands of dollar of equipment. His friends couldn’t sell it – but lucky for Chris, cooking it any less would not have created that distinct flavor – any more and the still would have been ruined. No one would risk that again. 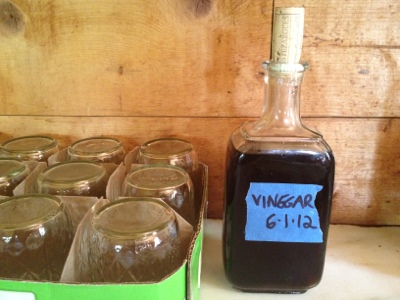 As Chris made plate after plate of pancakes, dotted with blueberries from his yard and topped with syrup made from the same smoky batch as the vinegar (a taste unique, and unlike anything one could buy), and the rest of the boys joined us, groggy, at the table, we talked about preserving and gardening and the Vermont way of life. Living at the top of a mountain was glorious in summer, but could result in some stranded days from mid-winter til spring. Preserving was a necessary way of life for many Vermonters, if they couldn’t get themselves down the mountain (let alone back up to their house) in snow or mud season. Chris told me of friends who made huge batches of blueberry jam or salsa or tomato sauce or fancy pickles, more than they could ever eat, and gave them away to family and friends. Few considered selling them at a local farmer’s market or on the internet. They knew the price they would have to charge to make it a financially viable business was more than many locals could afford – especially when they each had their own stock of preserves. Plus it was about community; Chris had more blueberries and a continually improving vinegar recipes, while friends of his had chickens or hunted deer or grew more zucchini than they could ever eat. People didn’t move to Vermont – the poorest state in the country – to get rich, but rather they often lived here to live a rich life.

In the past year, traveling between two urban centers, the main part of my life that had suffered was, ironically, that which put effort into procuring and preserving local and consciously produced food. While I had plenty of cooking pots to spread between two kitchens, I only had one canning pot – and my current Brooklyn kitchen is definitely diminutive enough to make any preserving effort a challenge. This energy had translated instead into learning more about the food culture in my new, diverse neighborhood, and to researching the artisanal efforts in an urban center, where many people share values with people like Chris, but choose to live in an environment that is, by most accounts, the opposite of his mountain estate. Talking with Chris and seeing his fabled cabin for myself, I was reminded of what I loved about full days spent canning in a steamy kitchen splattered with tomato, of hot mornings spent picking buckets of strawberries, more than I thought I could ever use. I recalled tip-toeing into the basement where my Nani and my mother and aunts were dressed in aprons, forming an assembly line of boiling pots and steaming jars. And I thought of my grandmother’s basement shelf, lined with a half dozen versions of pickles that I knew would make an appearance at Christmas, and jars of jeweled fruits to be turned into pies even during the coldest winter days. While they had not lived in any real fear of being trapped in their homes for days, they had both faced feeding a family on a small budget, and knew that a few sweaty hours in the depths of summer would ensure that there was enough to eat when snow covered the ground.

But isn’t it more than that? Neither grandparent would starve were it not for their canned (really jarred) goods. And in fact, when I visit my grandmother I often pilfer a few items from her basement shelf, starting with pickles and “chili sauce” marked with years in the mid-aughts, already pushed to the rear, the front row replaced by newer batches. There is the obvious satisfaction of eating something grown and prepared by hand. How many times did I profess that I first started my urban garden in search of the perfect taste of a tomato, plucked from the vine. And then there is that search for an allusive flavor – the smoky maple vinegar that doesn’t exist perhaps anywhere in the world except on Chris’s kitchen counter. Or maybe it is a memory – the chance to remember summer’s fresh blueberries even at a time of year when nothing can be coaxed from the ground.

Before we left, Chris sent me to his blueberry patch with scavenged cups and yogurt containers, with instructions to take as much as I would like. He was right – even though he had picked a gallon the day before, the bushes were heavy with fruit that released in bunches when barely raked with my fingers. Picking maybe a dozen cups of berries took barely ten minutes. 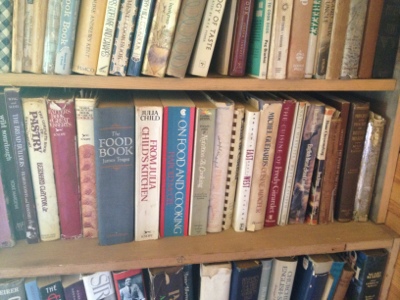 When I got home, I energized to find a way to preserve that perfect Vermont morning in edible form, as well as to help share that morning with others. Inspired by Chris’s maple vinegar – and with further help from a recipe I copied from a cookbook of his from the 1970s – I made a batch of blueberry vinegar, sweetened with local honey instead of sugar. Inspired by a chutney recipe, I also made blueberry salsa – its fruitiness balanced by the savory red onion and a garlic clove. And the last few cups of berries, I boiled down and then strained into honey-sweetened syrup. As usual what seemed like a huge harvest was reduced into a few jars of preserves, mostly to be doled out months from now as holiday gifts. But what I really gained was a reminder of why I cared about preserving my own food and what might lost when this art – and I will call it an art – is forgotten. Yes, it is just a taste of a Vermont summer morning some future winter evening in Brooklyn, but more so it is the imagination and promise and wonder that can turn a ruined batch of maple syrup into something completely unique and fleeting, never to be tasted again. 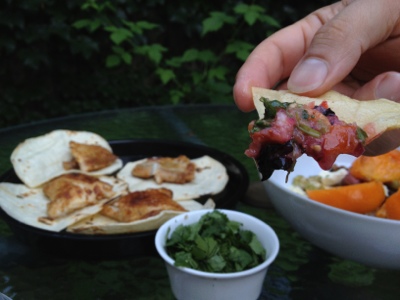